The Gladiator, Spitfire and Hurricane were definitely the first aircraft names injected into my brain as a wee lad. I also remember Dad making the odd plastic model, the nicest of which was a yellow Tiger Moth with three black bands behind the cockpit area, red fuselage stripes, funky tail feathers and banzai style sunburst wings. It was an Airfix 1:72 scale classic, beautifully trussed with fine cotton thread and exquisitely hand painted. I think I was 5 when I totalled it or just grounded the thing but I can still see Dad’s scolding eyes and feel the sting of the surprise back hander to the cheek.

You see, Dad had a 1/3 ownership in this beast, the real thing that is, G-ANFM. It was an adventure that didn’t last too long as apparently the whole affair was prone to giant cock ups as the aircraft enjoyed the reliability of a seventies Jag. I do remember some of the tall tales of woe associated with this Wundermaschine, in particular when one of the owners nearly fell out of the front cockpit when his harness came undone during one of Dad’s slow and slightly negative barrel rolls. Quality stuff. "Needless to say, biplanes were the only ‘real’ machines of any interest and the image of the Gladiator as the ultimate thing ever produced by man was etched into my young reptilian brain..."

Needless to say, biplanes were the only ‘real’ machines of any interest at that time and the image of the Gladiator as the ultimate thing ever produced by man was etched into my young reptilian brain only to be further stamped into my 18-year old imagination when learning aerobatics on the fabulous Bucker Jungmeister, HB-MIX. If ever a mini Gladiator there was, then this was it! Blessed with the nicest controls of any classic aircraft in the sky it felt like Faith, Hope and Charity was given new meaning as I zoomed around the Swiss Alps more upside down than straight and level. What a way to grow up, it was a dream.

So one fine day a few years ago, after a long long time in rebuild, the Fighter Collection’s Gladiator (Mk.II G-GLAD) was ready for some taxi trials. Dad sits me in the cockpit, points at all the knobs and after a few questions on how to start it, we prime the engine, mags on and ‘clear prop’. The Bristol Mercury leaps into life on the first blade. There’s an immense feeling of thrust at 800 rpm and it’s oh so smooth, unlike any of the other patrrup, patrrup, patrrup radials I have sat behind. Effortless. I just sit there like a beaming fat cheshire cat, grinning from ear to ear.

After about a six minute warm up, Dad taps me on the shoulder and asks how does it feel and if I’m ready for the taxi trials. I yell, ‘It feels great, but why not just go for a roast?’. He looks at me with a sort of ‘aaaahhhh’ think bubble expression and says OK. I couldn’t believe it, OK! Holy crap, OK, here we go! I wiggle into the chute I am sitting on and squeeze into the undersized harness which is just a silly pre-war contraption with pins and what not, steal a quick gander at the dials and wave away the chocks.

Wow this thing is not good in the taxiing department but then again it’s a darn sight better than the Hawker Nimrod, which is appalling. The brakes are a sort of afterthought and can’t be counted on for anything meaningful, so I ask for a strong-back TFC engineer to kindly snap to attention and wing run me down to the grass 06 threshold, which is about 1200 yards to the west. The poor chap (I’m not too sure but I think it was Roy) isn’t expecting such afternoon manoeuvres and by the time he helps me swing into wind his forehead’s pushing some serious beads. But he gives me the all clear backed up with a glorious toothy smile and away we go… Smooth input of power to avoid a rich cut and we are airborne in less than 150 yards, effortless and easy to control. Very little left boot on the take-off roll and climb out with a sensation which brings me back years to the Jungmeister. The engine feels and sounds solid but reminds me of a flying sewing machine. If you’ve ever sat behind one of those old Singer jobs with the foot pedal you’ll know what I mean. I haven’t looked at the airspeed or anything bar the boost gauge and oil pressure and I’m already climbing through 2,000 feet. I can’t quite believe it…

Once the initial emotional roller coaster wears off I take a little looksee into the cockpit to try and figure things out. Ooh heavens there is a lot of gear in here. It feels as though I’ve forgotten or never known what half of the buttons and levers do. I sort out the thing with the fuel tanks and switch over from gravity to normal and make sure the generator lever is put on half charge and a few other bits and pieces and decide now would be a good time for some zooming around.

With strict instructions from Dad not to do any aeros at this stage I settle for some wing overs and stuff like that. Keeping the power pegged and +1.5 lbs of boost, which requires a bit of an eagle eye as you dive in, I notice the need for quite a bit of right rudder on the way down but nothing too heavy in comparison with a Spit XIV. The speed builds up smartly to the CAA VNE of 225 mph within 2,000 feet and 40 degrees nose down but clearly it wants to go faster!

After some general looning about I figure it might be a good idea to climb and check out the slow speed handling and stalling characteristics before shooting my first approach. Everything is docile and easy apart from slowing this thing down which is a big deal and requires quite a bit of planning. The fixed pitch prop just keeps on making power even at idle and the four tiny wing flaps offer little resistance. OK let’s go in for the run and break to land. Yessss, nice and low for the lads. Downwind at about 800 ft and what did I say about bleeding off the speed, it’s worse than the Bearcat! It’s so slippery. I figure let’s do a Spitfire style curved approach to see where we are going but I’m still too fast. I daren’t side slip much, not being too sure about the effect on the flaps and what not, so I just sit there and wait in a flat flare for what seems like ages at 80 mph and about a foot off the ground. Ever so slowly, as the speed decreases, I pressure the stick back and land long but smoothly three point. We taxi straight back in, I’m elated, ecstatic and a bit drained. The engine unwinds fast. The crackling sound of the exhaust as it cools mixes with the ringing in my ears and fills the cockpit with the kind silence you can hear.

What an amazing sensation, a privilege and an honour. The Gladiator is ‘the’ mythical sword of the early wartime fighter pilot. It is a lovely, perfectly balanced and beautiful weapon which makes you feel invincible and good. There is nothing to add or subtract, it is carefree and perfect just as it is. But above all, it rewards you and makes you smile. Flying the magical Gladiator is truly one the best aviation experiences of my life, closely followed by EP120, which is another story. "Yessss, nice and low for the lads."

Thanks to all at The Fighter Collection who keep them flying and to Dad who infected me so early on and who followed through so flawlessly. 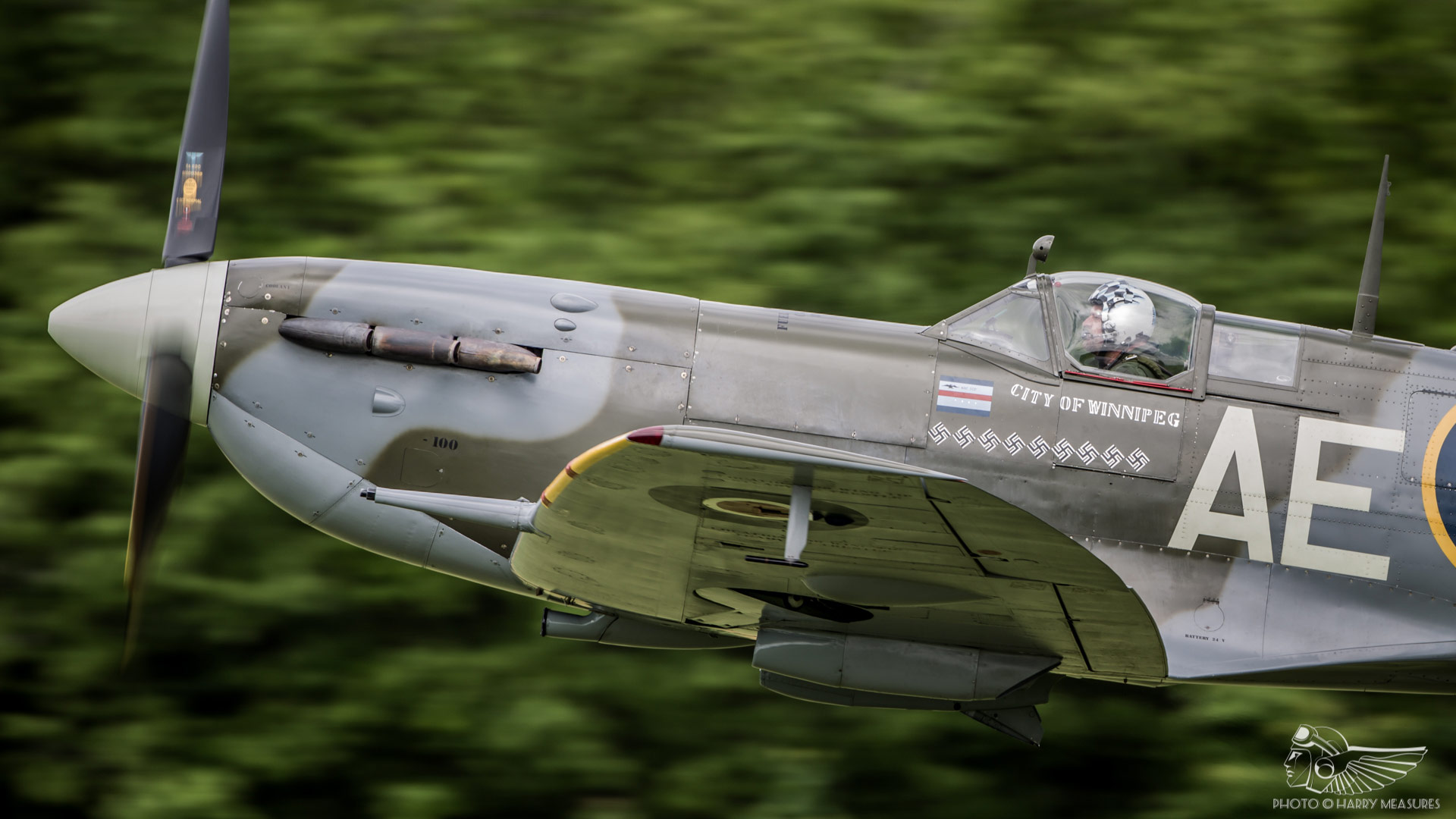 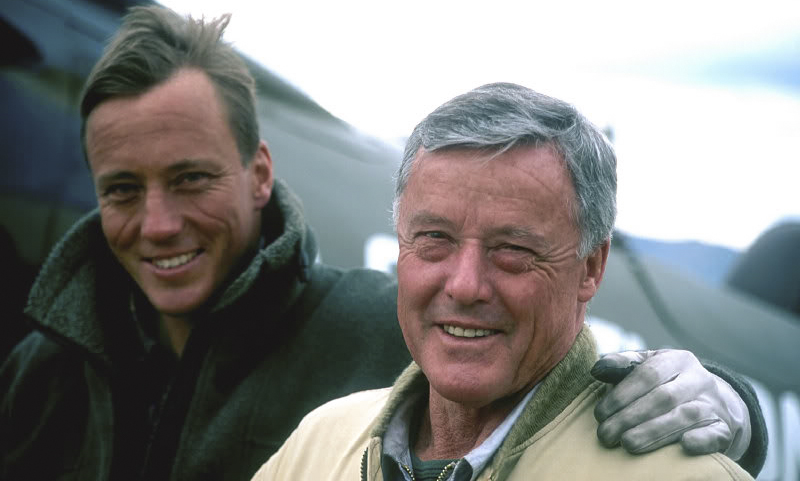